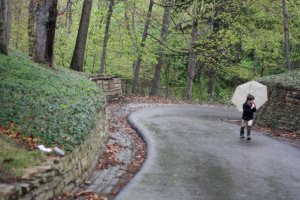 Last night I was doing absolutely nothing.  In fact I think I was wasting time, which is worse than nothing. My eight year old brother Luther came thumping up my stairs.

I regret to say that I had a struggle.  I could easily tell him to go downstairs—Duncan would be up soon—and resume my pursuit of nothingness.  But something inside me—maybe it was the grace of God—said: “Why shouldn’t he sleep with you?  This could be a wonderful opportunity to build your relationship with your little brother.”

So I told him yes.  I said I would read for a little while, but while I was in the self-sacrifice spirit I thought I might as well ask if he wanted me to read to him instead.  He said yes.  He picked up a book that we had started a long time ago.  Castaways of the Flying Dutchman, by Brian Jacques.  We had only gotten a few chapters into it.  What I deemed to be a self-sacrificial act on my part proved to be one of enjoyment to both of us.  Luther has a brain-sponge that soaks up information.  Maps were pulled up so we could see where the seas of Tierra Del Fuego and the Cape of Good Hope were situated.  Luther explained to me why Captain Vanderdecken was so wicked.

“Because what he said about nothing being able to stop him going around Cape Horn, not even God.”

“Because God can do anything.”

It was a simple explanation, but I saw that he understood the captain’s defiance of God’s authority and power.

Before we went to sleep we talked.   We discussed all sorts of things.  Oceans, swimming, sharks, history, what he wants to be when he grows up.  We played a game where we listed all the different fruits.  Then we played a variation where we listed all the different vegetables.   We got so tired that there were five minute intervals before the other listed the next vegetable.  I think we both fell asleep after I said “kale.”  Throughout the night I was conscious of the little boy next to me.  He provided a comfort to my loneliness that I often experience when I miss my sister.  He was also a little heater in the bed, since my room is always very cold.  In the morning Duncan came running up the stairs and told us breakfast was ready.  Luther stumbled out of bed, his eyes half closed.

Almost three and a half years ago my brother left home to go to Texas as an intern for a Christian company.  As a young girl of fourteen I didn’t realize that it marked the termination of his life at home.  Over the next two years he was in and out.  He struggled, and we struggled with him.  I remember writing in my journal the sorrow I felt at having him so far away.

“It feels like a limb has been cut off of my body.  After it’s cut off the limb may do whatever it likes, but the body must suffer and learn to do without it.”

Such was my rather pessimistic view on the matter, but the truth was I missed him terribly, and thought myself to be undergoing a sort of trial that was not typical for girls of my age.  I felt that it was a time to mature, to not roll with the punches but to rise up and fight them like a grown up.  Like most young girls my views on maturity were rather flawed.  When Christmas time came I thought that I must be sober-minded about it.  I was truly bothered with the idea that people got more excited about “Christmas cheer” than the birth of Christ.  Truly, I unconsciously thought we must all be moralists and pay attention only to Christmas as it had to do with Christ.  To start not caring about the presents.

Last year was my brother’s wedding.  It was a week after Christmas, so everything was traumatic during that time and Christmas was rushed.

This October my sister got married, but we have been quiet ever since then.  Our family affairs have calmed down.  There are no great changes, and low and behold, Christmas is coming.

Looking back on that year when Peter went away, on all the nights I cried myself to sleep and all the times when I thought I must mature and leave behind the childishness of my character,  I see how wrong I was.  True, it was a struggle.  It naturally took away that childish naivety.  But still children know better.

I told one of my friends yesterday that I was as excited about Christmas as a baby.  When Tirzah was hiding a present from me I was jumping up and down outside her door saying: “I LOVE CHRISTMAS!”  I was suddenly aware of an eager anticipation build up inside of me.  I can’t wait till mommy and daddy wake us up and we come down to the brilliant room.  It is because of Christ that we are able to enjoy Christmas, and I do not think Christ was a moralist.

I see how he has changed my heart.  Even my parents enjoy the exchanging of gifts, the Christmas cheer, the lights, the music, the snow, the fellowship.  It is a time to be happy, to be glad, to be grateful.  In truth, I am beginning to realize how much sense I lost when I began to apply myself to growing up.  Last night I kept reminding myself, as I talked to Luther: “Don’t talk to him as an adult talks to a child.  Condescendingly.  Talk to him as though he’s teaching to you.  Listen to him.”  And he did teach me things.  He taught me a simplistic form of happiness by his manner of talking.  He taught me about salamanders and lizards and sharks and amphibians.  He told me a story about my mother that I had never heard before.

It’s only seventeen days until Christmas, and I can hardly wait.

By the way.  This picture is a picture of a Christmas child.  There isn’t any snow.  But he is a Christmas child because he is happy in his youth, and he is persevering, and he is looking forward to Christmas with great impatience.  He is truly a gift to me, as are all my dear brothers.